Posted on January 3, 2014 by lindsaydoeslanguages

From the start of my degree, I knew I’d be heading to Spain for a week in the summer of 2013 for a summer school. I also knew I wanted to make the most of it and see some more of Europe in the process. A trip I’d wanted to do for some time gradually began to click into place.

For a number of years, I’d wanted to take the ferry between Spain and Morocco – this was the perfect chance! As things began to work out, we realized we could also hit Portugal on our travels. So this July, my friend Hannah and I set off on our Iberian (and African-ish!) adventure!

When we landed in Marrakesh, the first thing I noticed was how much French is spoken here. I had spent many a car journey listening to Arabic stuff to give me a grounding just in case French wasn’t as widely spoken as I’d hoped but it turned out you don’t always need the language of the country you’re in to survive, as we discovered in Essaouira.

We stayed at a Riad where Hannah had been before but they had moved buildings (sounds strange, I know!) so we’d agreed to meet someone in the main square to take us there. However, it was Ramadan and so by the time we arrived in the city and eventually got through to them on the phone, they were having their Ramadan breakfast. Not having eaten ourselves, we headed over to the food stalls in the square that was now buzzing with life. We found ourselves being called to various stalls, and eventually chose one with lots of locals and what we (wrongly) assumed to be free bread on the tables. I love Moroccan food and the food here was good. However, we were lucky enough to be invited to eat Ramadan breakfast almost everywhere we went every day in Morocco! So that tagine was the only real meal we had to buy in Marrakesh.

We headed out early the next morning with very little direction other than the loose idea of visiting souks, buying a little something and maybe chilling in a hammam As it turned out, a hammam was the first thing we found and not really having a great idea of exchange rates or normal prices of a hammam, we went for it. My God. I didn’t know I was that grubby. Or that it was possible to get that much grub off of someone’s skin. I’d bought a very modest swimming costume back home for moments like this, and felt very proud and respectful when I stripped down to it for the lady to scrub me.

She motioned her hands from her shoulders downwards. It looked like she was telling me to pull down my swimming costume! I repeated the movement and tentatively lifted the strap from my shoulder. She nodded. I pulled down my swimming costume to my waist. There’s no way I was taking it all off! I paid good money for that costume for this exact moment. I was going to get my money’s worth. A few minutes later, after a good scrub down and being covered in mud soap, I was ushered into the sauna where Hannah was already sat sweating it out.

“New friendship level.” I shrugged. Hannah had worn a bikini and so was still ‘fully’ clothed.

After various scrubs and washes, we were shown into a shower cubicle. Although we were washing ourselves at this point, the ladies stood and watched ready to indicate to me to pull the whole costume down when I turned to face them. I didn’t.

We were then given a gown along with our scrub mitt to keep as we were told to relax on the beds in the first room. Finally we were sent upstairs where we were told to relax yet again on individual beds. This bit was weird. I think there’d been some miscommunication as to which package we paid for. We didn’t pay for a massage but we kept quiet just in case they were feeling generous. After about 5 minutes, we entered the final room and were given a pot of mint tea.

We soon headed out into the heat of the day, both secretly knowing but neither wanting to admit that we’d be filling up our sparklingly clean sweat glands very soon. This is where the souks came in. Undercover window shopping with compliments of our French proved to be a very relaxing way to spend the rest of the day. Especially when one man carving skewers with a one foot lathe offered a free demonstration and made me a personal necklace before our eyes after I asked him a few questions in French.

Once filling our scrubbed pores with fresh sweat and sun cream, we decided to head back to the Riad before dinner. Best. Timing. Ever. Just as we were preparing to leave again in hunt of food, the Riad owners were preparing to start their Ramadan breakfast as dusk was approaching, and they were very adamant we join them. Wow. What a feast! It was really lovely to be involved with a personal example of the breaking of the fast up close.

Overall, Marrakesh proved to be just as beautiful, orange and sensory as I imagined, but also a lot safer and friendlier than I’d imagined before arriving. Definitely a place I’d like to go back to and would recommend. 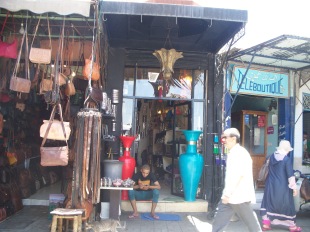 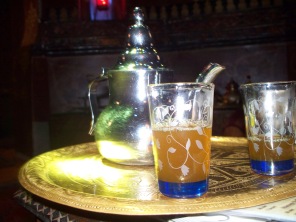 One of many mint teas!

The inside of our Riad.

Looking up in the Riad.

The maker of my lovely necklace!

I forgot to say in the post how much orange juice there is – it’s everywhere!

Hannah deep in the souks.

Over to you... Cancel reply

For where do you care?